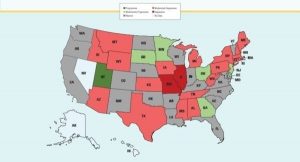 Ivy Morgan and Amy Amerikaner from the Education Trust  conducted an analysis of school funding equity across the United States. and within states. What they found was shocking for the largest economy in the world!

They have found that an $1,800 gap per student exists among school districts that service a larger population of minority populations. This is equivalent to a 13% drop in funding. While on its face 13% does not seem statistically significant, Morgan and Amerikaner explain that a sample of 5,000 students with an $1,800 gap per student equates to $9 million in lost revenue per year. This significantly impacts school district operations and  promotes further barriers to education resources.

While funding gaps promote  education inequality nationwide, not all states follow the same patterns. Morgan and Amerikaner also conducted an analysis of state by state funding for disadvantaged populations and found that some states have carefully avoided falling into this trend. Nebraska significantly contributes to the funding gap for students of color, with a nearly 24% difference in funding. 14 states across the nation display similar funding patterns that promote educational inequality among populations of color.

In contrast, Utah spends 21% more per student funding in their highest poverty districts. 14 other states follow similar funding patterns to address the needs of their highest poverty districts. It is important to note however, that Utah does not receive federal funding due to their failure to follow federal mandates. This is significant not only in the fact that Utah instead diverts local revenue towards their low-income districts, but also because federal mandates have historically contributed to educational inequality.

What is disturbing about this report, which was published in 2018, is that it correlates to an earlier report written by Linda Darling Hammond at the Brookings Institute from the late 90’s that identified educational disparity among populations of color. The fact that this funding gap has only broadened is deeply disconcerting, and emphasizes that policy-makers must proactively address funding gaps in disadvantaged populations.

This site uses Akismet to reduce spam. Learn how your comment data is processed.

Welcome to our course blog!

This blog lets students summarize what they are learning about research. It also lets them post examples of good research that they find each week -- analyzing them to highlight the key design elements that make good research possible.

(We will delete spam and comments that are impolite, irrelevant, or oriented toward anything but reasoned learning.)